Mario Kart is coming to the App Store 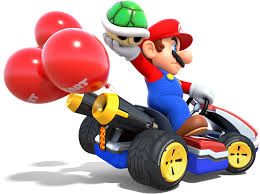 Nintendo’s latest announcement was that Mario was moving to smartphones. An app, Mario Kart Tour, is set to be released in the next financial year, meaning anywhere between April 2018 and March 2019.

No details about Mario Kart Tour have been made available other than its existence, but the Mario Kart franchise is one of Nintendo’s biggest. Yesterday the company announced that 14.86 million Switch consoles have been sold, along with about half as many copies of Mario Kart 8 Deluxe — a straight port of a game that managed to sell a further eight million copies even on the Wii U.

Nintendo is likely to have more mobile titles in the works. The company originally planned to have released five smartphone games by 2017, but only Super Mario Run, Fire Emblem Heroes, Animal Crossing: Pocket Camp, and the ill-fated Miitomo social app have made it out so far. Last year The Wall Street Journal reported that Nintendo was working on a Legend of Zelda mobile title.

Based on the last Super Mario app that was released with a price of $9.99, it is suspected that the new app will charge a fee also. On February 1st 2018 Nintendo tweeted the exciting announcement, “The checkered flag has been raised and the finish line is near. A new mobile application is now in development: Mario Kart Tour! Releasing in the fiscal year ending in March 2019.#MarioKartTour.

The app will include the favorite characters, Mario, Luigi, Link, and Princess Peach. This has made many fans very excited and eager for the new app. Make sure to keep your eyes peeled for the new app next March!
Posted by The Mustang Stampede at 7:26 AM