On February 14th, 2018, a gunman came unexpectedly to Douglas High School. A mass shooting occurred. The shooter was a 19 year old, killing 17 high school students and staff, heartbreaking to so many around the area and across the country. Students have since been campaigning for gun control legislation.

Providing grief counseling, students have managed to step up and make a stand to show that these students shouldn’t have to go to school known as a safe place for them and end up running for their lives from a shooter. Students have started “The Nationwide School Walkout,” this occurred at 10 a.m a month later for the remembrance of these student.

On March 14th, 2018, students nationwide are planning a walkout. This is for the 17 students and staff that died in the high school shooting in Florida. This will be a protest for gun laws. Some people will be protesting for more strict gun laws. This walkout wants to protest 3 laws: to ban assault weapons, required background check before purchasing a gun, and a gun violence restraint law stating that people who show violence will be disarmed. President Trump has brought up an idea of having teachers carry guns during the school day. This could be an opportunity to save lives, however some people believe teachers should just teach.

In the end, our nation needs a change, how many more school shootings, or shootings in general, are going to happen before we can stop this? We are 17 lives too late. 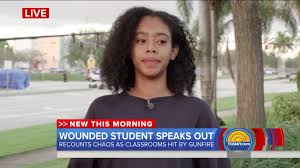 ‘Student from the tragic incident speaks out for justice.’
Posted by The Mustang Stampede at 4:00 AM