article by Anna and Emma Snyder
edited by Erin Partridge


“President Winfrey” was the talk of the entertainment world after Winfrey accepted the Cecil B. DeMille Award. On the night of the Golden Globes, Oprah Winfrey gave an extraordinary speech. It was so impassioned that after, fans were calling for her to run for president in 2020. After the speech Oprah’s longtime partner Stedman Graham was quoted, saying that a run for Oprah is definitely a possibility. “It’s all up to the people,” Graham told a Los Angeles Times Reporter. “She would absolutely do it.” With all the power and fame Oprah has, this could boost her campaign up by a lot if she decided to run. She has many people who support her and she could definitely handle it with all that she has gone through in the past.

Oprah is a American media proprietor, talk show host, actress, producer, and philanthropist. So, with all her experience in media this also helps her with the popularity of her supporters and fans. Oprah was also argued the “world’s most powerful woman” by CNN and Time.com, the “most influential woman in the world” by The American Spectator, “one of the 100 people who most influenced the 20th Century" and "one of the most influential people" through 2004 to 2011 by TIME. Through all this recognition Oprah is an influencer, a supporter and she knows what’s right and that’s what definitely makes her qualified to run for president this upcoming election. And with all her influence on the media and with all her fans she could have a really good chance to become the next president of 2020, matter fact the first woman president in America. For when the time comes, let's see what Oprah's choice is, running or not. 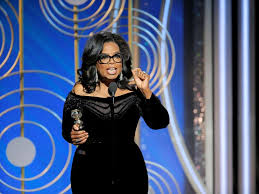 Oprah Winfrey, on the night of the 2018 golden globes.
Posted by The Mustang Stampede at 4:00 AM