Now that the winter season has started, all of the winter sports have begun. That means the start of the MHS Indoor Track season. All of the students on the track team have been working hard this season, and it is just beginning.


The boys and girls on the track team compete in various events, including 55 hurdles, 55 dash, 200, 400, and 600 sprints, 1 mile, 2 mile, shot put, high jump, long jump, and the triple jump. Both the boys team and the girls team compete all of these events.


Both teams have already competed in many track meets, and the days of the week that they are held on alternate between Wednesdays and Saturdays, more commonly on Saturdays. Most or all of the different events are held during each track meet. Practices are held on weekdays after school from 2-4. The students that run indoor track and field, work really hard every day of the week.


As you already know, there is a variety of different events in every track meet. The 55 hurdles are a 55 meter long track of hurdles, one after the other. The 55 dash is a 55 meter course in which you run as fast as you can to get to the end and try to beat your previous times. They also compete in 200, 400, and 600 meter sprints, and also 1 mile and 2 mile sprints. The goal of each is to get the best time, or to beat your own time. A sophomore on the MHS winter track team, Cerelene Libby, says, “The shot put is an interesting event. It is basically just throwing a ball as far as you can. It doesn’t have anything to do with running or jumping.” There is also the high jump, the long jump, and the triple jump. For the high jump, runners have to jump over a horizontal bar at a measured height. They would then land on a crash mat. The objective of this event is to jump the highest and beat your own score. The long jump is an event in which the runners jump as far as they can from a starting point. The goal of this is to jump the farthest, and beat your own distance. Last but not least, the students participate in the triple jump. This event is similar to the long jump, except there is a sequence of 3 jumps, a hop, a bound, and then a jump into the sand pit. The objective is the same as it is for the long jump, to jump as far as you can and beat your previous score.


As you can see, both the boys and girls track teams compete in many different events that require tons of different levels of skill. All of the MHS track and field runners, whether they be a freshman or a senior, work very hard every day that they have practice or a meet. Most importantly, they always try their best and work hard to reach their goals, and the high school can’t wait to see what the 2018 winter track season brings for our school!


Here is a picture of some of the runners on the girls team at their meet against runners from other surrounding schools. 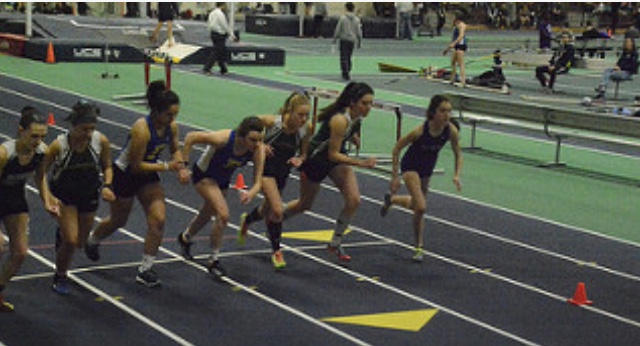