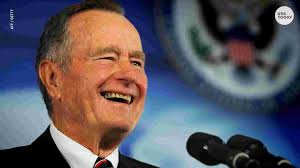 George Herbert Walker Bush, the 41st President of the United States from 1989 to 1993, passed away November 30th, 2018 at the age 94. His passing was seven months after his wife’s, Barbara Bush, who was the United States Former First Lady. She died on April 17, 2018, in Houston, Texas. George Bush not only was our 41st President but he was also our 43rd Vice President 1989–1993 and a father to George W. Bush, Jeb Bush, Pauline Robinson Bush, Dorothy Bush Koch, Neil Bush, and Marvin Bush. In George H.W. Bush’s honor, December 5 has been designated as a national day of mourning.

George H. W. Bush left behind a memorable legacy. He oversaw the end of the Soviet Union and the third German Unification, the Persian Gulf War, and touched upon more domestic issues, for example, the Americans With Disabilities Act (ADA). While signing this act in July 1990, he stated:  “Every man, woman, and child with a disability can now pass through once-closed doors into a bright new era of equality, independence, and freedom.” This act changed how people treated those with disabilities by prohibiting the discrimination.

President's George H. W. Bush's legacy will continue to live on.
Posted by The Mustang Stampede at 7:40 AM No comments:

Many students consider snow days to be a mini holiday where they sleep in and forget about all of their responsibilities, whereas, for school administration and staff, snow days are a problem with all the additional work. As early November, in the span of just two weeks, Massabesic has already experienced three snow days with many more expected to come.

In past years, snow days have caused loads of problems with the rescheduling of daily class plans, rescheduling of after-school activities, and an extended school that leads to a late start to summer. All of these problems bring stress to the school board and require them to make decisions and compromises to make up for all of the lost school days.

A student school board representative states, ”The school board is currently discussing many possible solutions and are deciding which are the most ideal ways to make up the lost school days.”  Some of these potential solutions could consist of, extending all half days to full days, taking away April vacation, or even adding an hour to the end of the school day for a certain period of time.
Posted by The Mustang Stampede at 7:37 AM 4 comments:

A Slow Start to the Basketball Season

One thing that the students of Massabesic High School are very involved in is athletics, especially when it comes to basketball season. The first real season game was on Friday, December 7. They played Thornton Academy at home. The First Team had a tough loss, but JV did come out with a win. Unfortunately, the Varsity team was not able to come out on top.

The girl's basketball program had their first game also on Friday, against Gorham. Unfortunately, the JV team had a tough game and didn’t get the outcome they wanted. The Varsity team also lost with the ending score being.

We are all hoping for both of their seasons to progress and for more competitive games to come in the future. Best of luck to all boys and girls winter sports! If you weren’t able to make this game, the schedules are linked below.

By: Trista Binette and Alexis Salisbury
Posted by The Mustang Stampede at 7:31 AM No comments: