Teens: It's Not Their Fault They're Tired

Article and Multimedia by Jakob Saucier
Edited by Colby Cole
A lot of teens have problems with going to bed late, and waking up early. But, researchers say, this late-to-bed and late-to-rise pattern is the way teenagers are biologically programmed, even though most school systems don't consider this when setting high school start times.
However some districts have respected the science enough to give teens more sleep-in time, and researchers have found a number of benefits, including improvements in attendance, daytime alertness, and decreased depression.
But most school districts claim after school sports and other activities, bus routes, and other scheduling issues as reasons for starting between 7am and 8am. 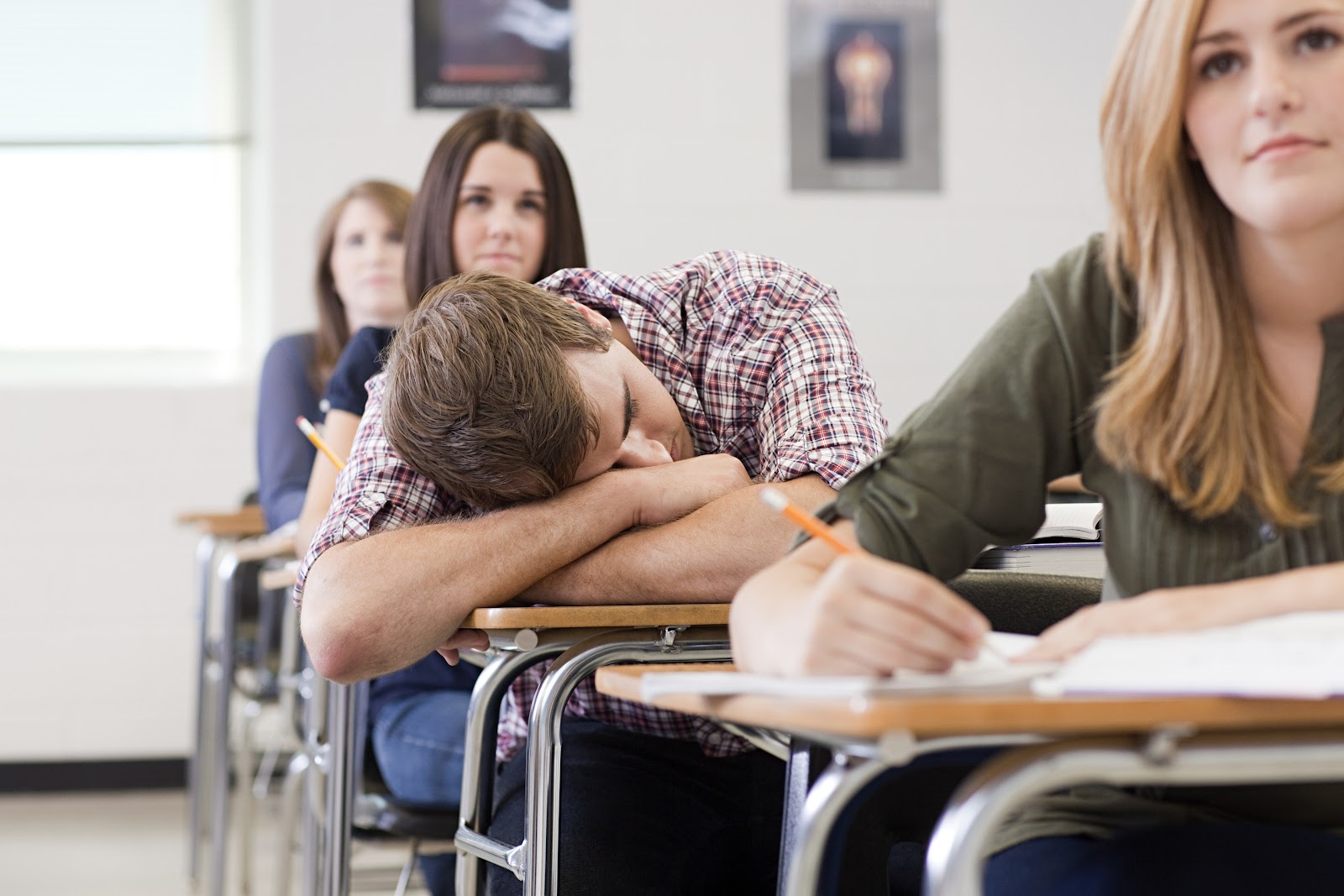 As a result, the majority of teens don’t get the 8 1/2 to 9 1/2 hours of sleep that experts say they should. According to the National Sleep Foundation, the average is about 7 hours of sleep a night for teens.
One study of Rhode Island teenagers found that 85 percent of teens got at least 10 hours of sleep per week less than they should. A Drexel University study found that only 20 percent of 12- to 18-year-olds studied got the recommended sleep on school nights. Researchers over the past decade have also learned that a teen’s body is different than those of younger and older people. Most teens can't easily fall asleep until about 11 p.m. Experts say their brains stay in sleep mode until at least 8 a.m.
One study, for example, led by Brown University Professor Mary Carskadon, tested the saliva of teens, measuring the presence of the sleep-promoting hormone melatonin at different times of the day. She teaches human behavior, and is director of sleep research at E.P. Bradley Hospital in Rhode Island. Throughout her research, she found that the melatonin levels rise later at night than they do in children and adults -- and remain at a higher level later in the morning. However, the reason melatonin is secreted in the teenage brain from about 11 p.m. until about 8 a.m. the next morning is unclear, experts say.

The delayed sleep phase of adolescence
But experts say that what they do know that the consequences to teen sleep deprivation is very serious in teens who don't get enough sleep. Dr. Helene A. Emsellem, medical director of the Center for Sleep & Wake Disorders in Chevy Chase, Md., and author of “Snooze... or Lose!” wrote her in book that there are physical, emotional, academic and behavioral effects including:

a) Going without enough sleep can make a teen a lot more likely to get sick, due to the number of T-cells in the body cells (which help us stay healthy), falls by 30 to 40 percent.

b) Sleep-deprived teens get more headaches the ones that don’t.

c) Students who earn C’s and below go to sleep later and have less regular sleep patterns than students who get better grades. Sleep affects learning and memory.

d) Sleep-deprived teens are more likely to use alcohol and drugs than those who don’t.

Some school systems around the country have taken note of the research findings, and have started high school at later times. Some of the first were two Minneapolis-area school districts: Edina, a suburban district which changed its start time from 7:20 to 8:30 a.m. in the 1990s; then Minneapolis Public Schools, which changed the start time for thousands of high school students from 7:15 a.m. to 8:40 a.m. in the 1997-98 school year.
The effects were studied for several years by researchers at the University of Minnesota’s Center for Applied Research and Educational Improvement, led by director Kyla Wahlstrom. They found that students became more alert, and students reported higher grades (although how much higher is unclear). Not to mention, some sports practices were shortened but sports continued, as did after-school jobs. Although some might say that this would intervene with other school starting times in the district, but it wouldn't be that much of a problem.
In Jessamine County, Kentucky, the school district swapped the starting times of elementary school with high school in 2003. Even though young children have no biological problem going to sleep early and waking up early, elementary school started later than high school.
Before the change in school times, high school started at 7:30 a.m., middle school at 7:40 a.m. and elementary school at 8:30 a.m.. Afterward, the school times completely changed: elementary school started at 8 a.m., middle school at 8:50 a.m. and high school at 8:40 a.m. School officials said students were more alert and focused on their studies.
The bad news? There are more than 13,000 school districts, including ours, in the country that have hundreds of thousands of teens still practically half-awake during classes.
This is an issue that many of Massabesic High School student's experience everyday. If you're one of them, how do we handle this? What can we do to show how much of a problem lack of sleep can be for students?