Teen Fights Back Against Isis

Article by Cameron Goodrich
Multimedia supplied by Ashley Davis
Edited by Jakob Saucier
Many of you know about ISIS. When a video of ISIS was posted of them destroying many artifacts that were over centuries old, most of the world watched helplessly, while they used sledgehammers and power drills to carry out this task. A 17 year old, Nenous Thabit, got to work. He told CNN over the phone, “In Iraq, there are people who are killed because they are sculptors; because they are artists. ISIS view them as apostate.” He considers the artists that sculpted the artifacts that were destroyed in Nimrud to be the works of his ancestors. Nenous began his work with clay as a seven year old boy, when his dad brought him to work and showed him how to work with clay. His dad said, “Nenous is an incredibly fast learner.” Until last year, sculpting was an after school hobby, now it's more serious to him. He stated, “They waged a war on art and culture, so I decided to fight back with art.” 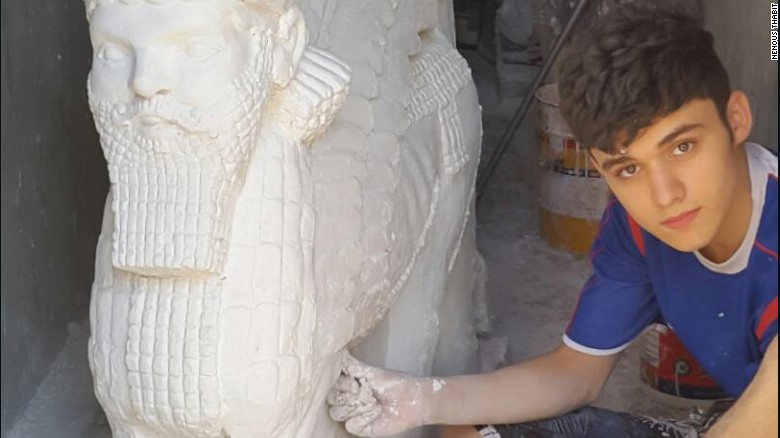 The Beard of Lamassu by Nenous Thabit
So far, Thabit has recreated 18 Assyrian statues and one mural, including his favorite, The Beard of Lamassu. Lamassu is the strongest creature in Assyrian heritage. The head of a man, the body of a lion, the legs of an ox and wings of a vulture. Not only does he recreate these artifacts destroyed by ISIS, he holds workshops for kids. This 17 year old sculptor by the name of Nenous Thabit has stepped up and done something to fight ISIS destroying artifacts when the rest of the world watched and did close to nothing to even try to help. He also is giving back to the community through his workshops. Now, think of ways that you could help battle something, whether it is cancer, the fight against ISIS or another group and do it. Step up like Nenous Thabit did, be a leader. Be a role model. Stand up for what you believe in, and most importantly, be part of your community.
"Teen Hits Back at ISIS with Art." CNN. Cable News Network, n.d. Web. 28 Nov. 2016.
Posted by The Mustang Stampede at 4:00 AM